I saw the civil sun drying earth’s tears,
Her tears of joy that only faster flowed.

Fain would I stretch me by the highway side
To thaw and trickle with the melting snow,
That mingled, soul and body, with the tide,
I too may through the pores of nature flow. 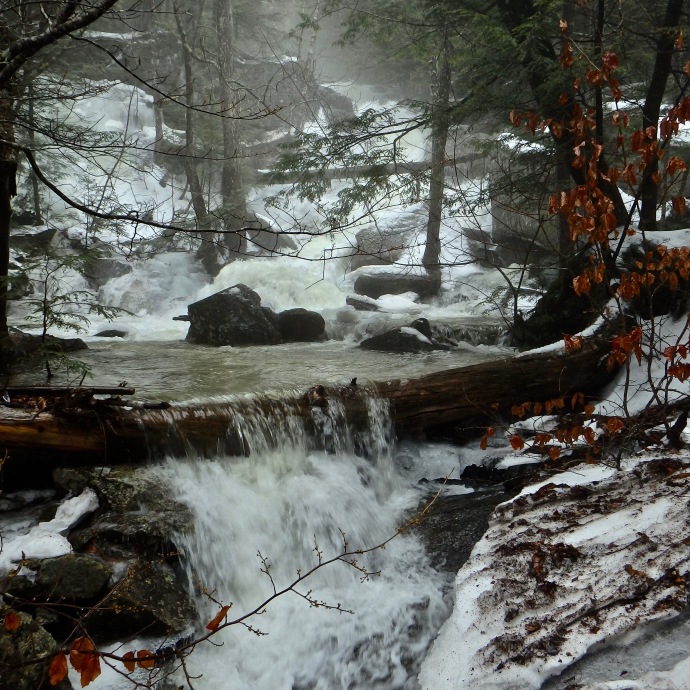 I love to wade and flounder through the swamp now, these bitter cold days, when the snow lies deep on the ground, and I need travel but little way from the town to get a Nova Zembla solitude, to wade through the swamps, all snowed up, untracked by man, into which the fine dry snow is still drifting till it is even with the tops of the water andromeda, and half way up the high blueberry bushes. I penetrate to islets inaccessible in summer, my feet slumping to the sphagnum far out of sight beneath, where the alderberry glows yet,….and perchance a single tree sparrow lisps by my side; where there are few tracks even of wild animals. Perhaps only a mouse or two have burrowed up by the side of some twig, and hopped away in straights lines on the surface of the light, deep snow, as if too timid to delay, to another hole by the side of another bush, and a few rabbits have run in a path amid the blueberries and alders about the edge of the swamp. This is instead of a Polar Expedition, and going after Franklin.

There is but little life and objects are few, it is true. We are reduced to admire buds, even like the partridges, and bark, like the rabbits and mice, the great red and forward looking buds of the azalea,

the plump red ones of the blueberry, and the find sharp red ones of the panicled andromeda sleeping along its stem, the speckled black alder, the rapid growing dogwood, the pale brown and cracked blueberry, etc. Even a little shinning bud which lies sleeping behind its twig, perhaps half concealed by ice, is object enough.

As I climbed the cliff, I paused in the sun and sat on a dry rock, dreaming.

I thought of those summery hours, when time is tinged with eternity, runs into it and becomes of one stuff with it….

Stood within a rod of a downy woodpecker on an apple-tree. How curious and exciting the blood-red spot on its hind head! I ask why it is there but no answer is rendered by these snow-clad fields. It is so close to the bark I do not see its feet. It looks behind as it had a black cassock open behind and showing a white under-garment between the shoulders and down the back. It is briskly and incessantly tapping all round the dead limbs, but hardly twice in a place, as if to sound the tree, and so see if it has any worm in it, or perchance to start them. How much he deals with the bark of trees, all his life long tapping and inspecting it. He it is that scatters those fragments of bark and lichens about on the snow at the base of trees. What a lichenest he must be! or perhaps it is fungi make his favorite study, for he deals most with dead limbs. How briskly he glides up or drops himself down a limb, creeping round and round, and hopping from limb to limb, and now flitting with a rippling sound of his wings to another tree. 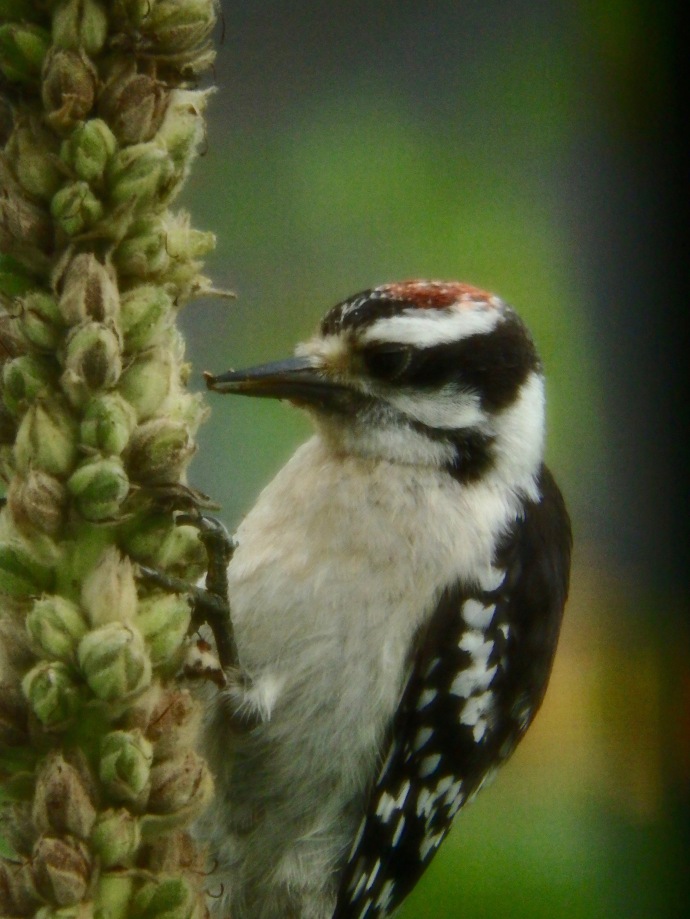 To Walden….It is bitter cold, with a cutting N.W. wind. The pond is now a plain snow field, but there are no tracks of fishers on it. It is too cold for them…..I would go through the woods toward the cliffs along the side of the Well Meadow field. There is nothing so sanitive, so poetic, as a walk in the woods and fields even now, when I meet none abroad for pleasure. Nothing so inspires me, and excites such serene and profitable thought….

Alone in distant woods or fields in unpretending sproutlands or pastures tracked by rabbits, even in a bleak and, to most, cheerless day like this, when a villager would be thinking of his inn, I come to myself, I once more feel my self grandly related. This cold and solitude are friends of mine….and therefore I come out to these solitudes where the problem of existence is simplified. I get a way a mile or two from the town, into the stillness and solitude of nature, with rocks, trees, weeds, snow about me.

I enter some glade in the woods, perchance, where a few weeds and dry leaves along lift themselves above the surface of the snow, and it is as if I had come to an open window. I see out and around myself.

Walden froze over apparently last night. It is but little more than an inch thick—& 2 or 3 square rods by Hubbards shore are still open. A dark transparent ice— It would not have frozen entirely over as it were in one night or may be a little more and yet have been so thin next to the shore as well as in the middle, if it had not been so late in the winter, & so ready to freeze. It is a dark transparent ice. But will not bear me without much cracking. 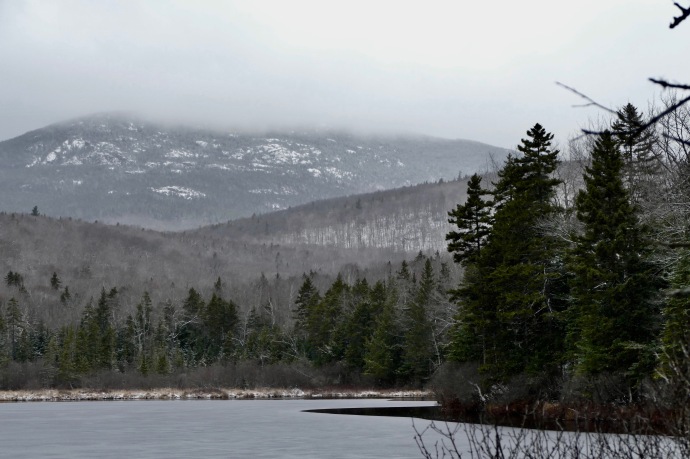 from “The Ponds” in Walden:

Why, here is Walden, the same woodland lake that I discovered so many years ago; where a forest was cut down last winter another is springing up by its shore as lustily as ever; the same thought is welling up to its surface that was then; it is the same liquid joy and happiness to itself and its Maker, ay, and it may be to me. It is the work of a brave man surely, in whom there was no guile! He rounded this water with his hand, deepened and clarified it in his thought, and in his will bequeathed it to Concord. I see by its face that it is visited by the same reflection; and I can almost say, Walden, is it you?

To-day the trees are white with snow—I mean their stems & branches and have the true wintry look-on the storm-side—not till this has the winter come to the forest.

They look like the small frost work in the path & on the windows now—. especially the oak woods at a distance, & you see better the form which their branches take. That is a picture of winter & now you may put a cottage under them and roof it with snow drifts.— & let the smoke curl up amide the boughs in the morning.

I love Nature partly because she is not man, but a retreat from him.  None of his institutions control or pervade her.  Here a different kind of right prevails….The joy which nature yields is like that afforded by the frank words of one we love. 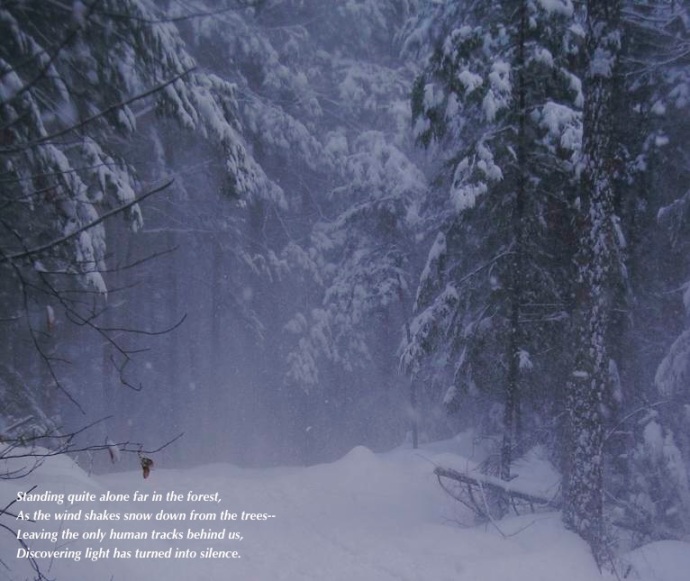 The ringing of the church bell is a much more melodious sound than any that is heard within the church. All great values are thus public, and undulate like sound through the atmosphere. Wealth cannot purchase any great private solace or convenience. Riches are only the means of sociality….In moments of quiet and leisure my thoughts are more apt to revert to some natural than to any human relation.

The snow is the great betrayer. It not only shows the tracks of mice, otters, etc., etc., which else we should rarely if ever see, but the tree sparrows are more plainly seen against its white ground, and they in turn are attracted by the dark weeds which it reveals. It also drives the crows and other birds out of the woods to the villages for food. We might expect to find in the snow the footprint of a life superior to our own, of which no zoology takes cognizance. Is there no trace of a nobler life than that of an otter or an escaped convict to be looked for in the snow? Shall we suppose that that is the only life that has been abroad in the night? It is only the savage that can see the track of no higher life than an otter. Why do the vast snow plains give us pleasure, the twilight of the bent and half-buried woods? Is not all there consonant with virtue, justice, purity, courage, magnanimity? Are we not cheered by the sight? And does not all this amount to the track of a higher life than the otter’s, a life which has not gone by and left a footprint merely, but is there with its beauty, its music, its perfume, its sweetness, to exhilarate and recreate us?

Where there is a perfect government of the world according to the highest laws, is there no trace of intelligence there, whether in the snow or the earth, or in ourselves? No other trail but such as a dog can smell? Is there none which an angel can detect and follow? None to guide a man on his pilgrimage, which water will not conceal? Is there no odor of sanctity to be perceived? Is its trail too old? Have mortals lost the scent? The great game for mighty hunters as soon as the first snow falls is Purity, for, earlier than any rabbit or fox, it is abroad, and its trail may be detected by curs of lowest degree. Did this great snow come to reveal the track merely of some timorous hare, or of the Great Hare, whose track no hunter has seen? Is there no trace nor suggestion of Purity to be detected? If one could detect the meaning of the snow, would he not be on the trail of some higher life that has been abroad in the night? Are there not hunters who seek for something higher than foxes, with judgment more discriminating than the sense of foxhounds, who rally to a nobler music than that of the hunting-horn?

As there is contention among the fishermen who shall be the first to reach the pond as soon as the ice will bear, in spite of the cold, as the hunters are forward to take the field as soon as the first snow has fallen, so the observer, or he who would make the most of his life for discipline, must be abroad early and late, in spite of cold and wet, in pursuit of nobler game, whose traces are then most distinct. A life which, pursued, does not earth itself, does not burrow downward but upward, which takes not to the trees but to the heavens as it home, which the hunter pursues with winged thoughts and aspiration, – these the dogs that tree it, – rallying his pack with the bugle notes of undying faith, and returns with some worthier trophy than a fox’s tail, a life which we seek, not to destroy it, but to save our own. Is the great snow of use to the hunter only, and not to the saint, or him who is earnestly building up a life? Do the Indian and hunter only need snow-shoes, while the saint sits indoors in embroidered slippers? 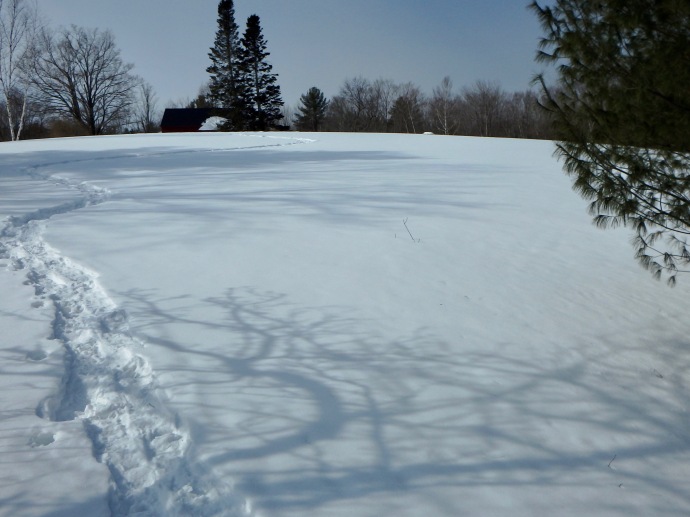