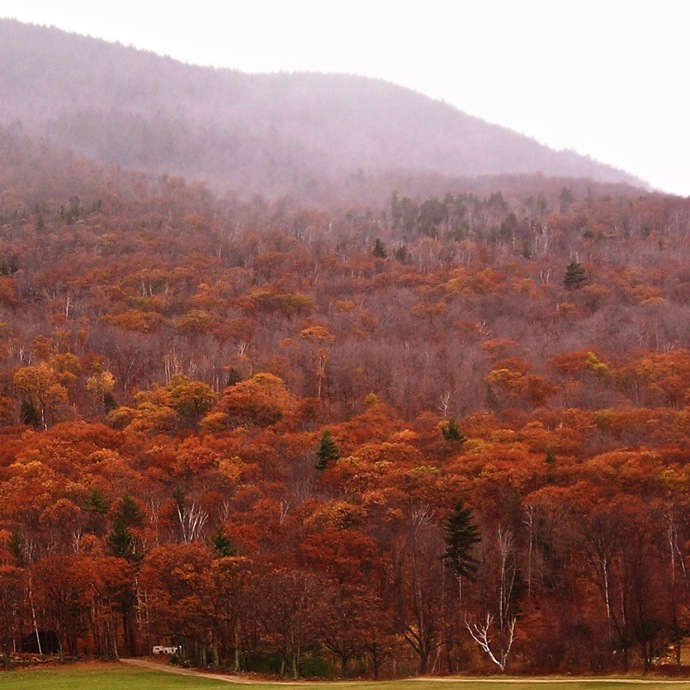 The large sugar maples on the Common are now at the height of their beauty. One, the earliest to change, is partly bare. This turned so early and so deep a scarlet that some thought that it was surely going to die. Also that one at the head of the Turnpike reveals its character now as far as you can see it. Yet about ten days ago all but one of these was quite green, and I thought they would not acquire any bright tints. A delicate but warmer than golden yellow is the prevailing color, with scarlet cheeks. They are great regular oval masses of yellow and scarlet. All the sunny warmth of the season seems to be absorbed in their leaves. There is an auction on the Common, but its red flag is hard to be discerned amid this blaze of color. The lowest and inmost leaves next the bole are of the most delicate yellow and green, as usual, like the complexion of young men brought up in the house. 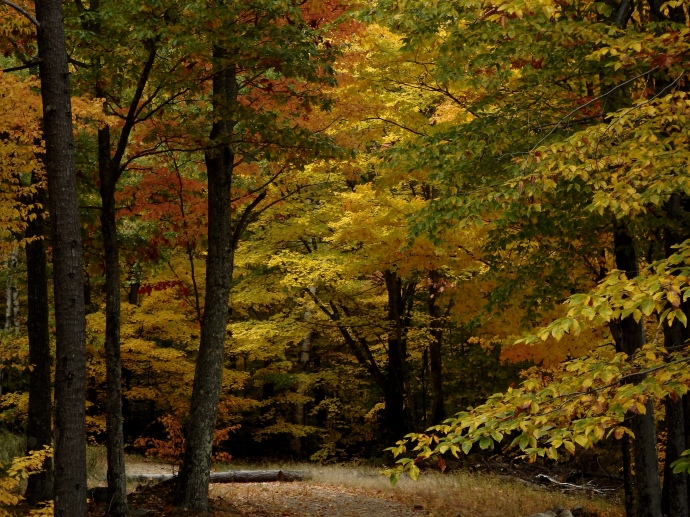 Little did the fathers of the town anticipate this brilliant success then they caused to be imported from further in the country some straight poles with the tops cut off, which they called sugar maple trees, —and a neighboring merchant’s clerk, as I remember, by way of just planted beans about them. Yet these which were then jestingly called bean-poles are these days for the most beautiful objects noticeable in our streets. They are worth all and more than they have cost, —though one of the selectmen did take the cold which occasioned his death in the setting them out, —if only because they have filled the open eyes of children with their rich color so unstintedly so many autumns. We will not ask them to yield us sugar in the spring, while they yield us so fair a prospect in the autumn. Wealth may be  the inheritance of a few in the houses, but it is equally distributed on the Common. All children alike can revel in this golden harvest. These trees, throughout the street, are at least equal to an annual festival and holiday, or a week of such, —not requiring any special police to keep the peace, —and poor indeed must be that New England village’s October which has not the maple in its streets. This October festival costs no powder or ringing of bells, but every tree is a liberty-pole on which a thousand bright flags are run up. Hundreds of children’s eyes are steadily drinking in this color, and by these teachers even the truants are caught and educated the moment they step abroad. It is as if some cheap and innocent gala-day were celebrated in our town every autumn, —a week or two of such days.

What meant the fathers by establishing this living institution before the church, —this institution which needs no repairing nor repainting, which is continually “enlarged and repaired”  by its growth? Surely trees should be set in our streets with a view to their October splendor. Do you not think it will make some odds to these children that they were brought up under the maples? Indeed, neither the truant nor the studious are at present taught colors in the schools. These are instead of the bright colors in apothecary shops and city windows. It is a pity we have not more red maples and some hickories in the streets as well. Our paint-box is very imperfectly filled. Instead of, or besides, supplying paint-boxes, I would supply these natural colors to the young.

I know of one man at least, called an excellent and peculiarly successful farmer, who has thoroughly repaired his house and built a new barn with a barn cellar, such as every farmer seems fated to have, who has not a single tree or shrub of any kind about his house or within a considerable distance of it.

No annual training or muster of soldiery, no celebration with its scarfs and banners, could import into the town a hundredth part of the annual splendor of our October. We have only to set the trees, or let them stand, and Nature will find the colored drapery, —flags of all her nations, some of whose private signals hardly the botanist can read. Let us have a good many maples and hickories and scarlet oaks, then I say. Blaze away!  Shall that dirty roll of bunting in the gun-house be all the colors a village can display? A village is not complete unless it has these trees to mark the season in it. They are as important as a town clock. Such a village will not be found to work well. It has a screw loose; an essential part is wanting. Let us have willows for spring, elms for summer, maples and walnuts and tupelos for autumn, evergreens for winter, and oaks for all seasons. What is a gallery in a house to a gallery in the streets! I think that there is not a picture-gallery in the country which would be worth so much to us as is the western view under the elms of our Main Street. They are the frame to a picture, and we are not in the dilemma of the Irishman who, having bought a costly gilt picture-frame at an action, found himself obliged to buy a picture at private sale to put into it, for our picture is already painted with each sunset behind it. An avenue of elms as large as our largest, and three miles long, would seem to lead to some admirable place, though only Concord were at the end of it. Such a street as I have described would be to the traveller, especially in October, an ever-changing panorama.

A village needs these innocent stimulants of bright and cheery prospects to keep off melancholy and superstition. Show me two villages, one embowered in trees and blazing with all the glories of October, the other a merely trivial and treeless waste, and I shall be sure the in the latter will be found the most desperate and hardest drinkers. What if we were to take half as much pains in protecting them as we do in setting them out, —not stupidly tie our horses to our dahlia stems? They are cheap preachers, permanently settled, which preach their half-century, and century, aye, and century and a half sermons, with continually increasing influence and unction, ministering to many generations of men, and the least we can do is to supply them with suitable colleagues as they grow infirm.

Children are now everywhere playing with the brown and withered leaves of elms and buttonwoods, which strew the trees and are collected into heaps in the sluiceways. In the woods even the little pea-vine turns a delicate yellow and is more conspicuous than ever, and in the now neglected gardens the asparagus-beds, greenish without, glow yellow within, as if a fire were bursting out there.

As I go down the Turnpike past Clintonia Swamp, I am struck by the magical change which has taken place in the red maple swamps, which just a fortnight ago were splendid masses of scarlet and yellow and crimson, rising amid the yet green trees, —pines and oaks, etc., —like immense flower-beds on one side of the town, visible for miles, attracting the eyes of all travellers; now, —though a few late ones are bright as ever in some places, —all their splendor gone, wafted away, as it were by a puff of wind, and they are the mere ghosts of trees, unnoticed by any, or, if noticed at all, like the smoke that is seen where a blaze is extinguished, or as the red clouds at evening change suddenly to gray and black, — so suddenly their glory departs, —desolate gray twigs.

The Salix alba is a light and silvery green. Since the red maples generally fell, the chestnuts have been yellowing, and the oaks reddening and yellowing. The chestnuts are now in their prime, though many leaves are fallen. The forest, which showed but little ripeness ten days ago, except about its edges and here and there as you looked down on it from a height, is now seen to be generally of a mellow brownish yellow, like perfectly ripe fruit, which we know to be more perfectly ripe for it being a little specked. By the brook, witch-hazel, as an underwood, is in the height of its change, but elsewhere exposed large bushes are bare. Rheus toxicodenron is fallen. The hornbeam is a greenish yellow, or yellow as it were dusted with green. The maple-leaved viburnum, now at its height, varies, with more or less of shade, from dark crimson through a delicate pale crimson to whitish. The sage willow, a light yellow, in prime, though hardly noticed amid the more conspicuous oaks. Larches have begun to change in water.

As I come though Hubbard’s Woods I see the wintergreen, conspicuous now about the freshly fallen white pine needles. Their shining green is suddenly revealed above the pale-brown ground. I hail its cool unwithering green, one of the humbler allies by whose aid we are to face the winter.

Saw, October 14th, a snake a Ball’s Hill, like a stiriped snake, but apparently yellow-spotted above and with the flatter head? Noticed a little snake, eight or nine inches long, in the rut in the road in the Lincoln woods. It was brown above with a paler-brown dorsal stripe, which was bounded on each side by a row of dark-brown or blackish dots one eighth inch apart, the opposite rows alternating.  Beneatg, light cream-color or yellowish white. Evidently Storer’s Coluber ordinatus. It ran along the deep sandy rut and would probably be run over there.

See larks, with their white tail-feathers, fluttering low over the meadows these days.

Minott was sitting outside, as usual, and inquired if I saw any game in my walks these days; since, now that he cannot go abroad himself, he likes to hear from the woods. He tried to detain me to listen to some of his hunting-stories, especially about a slut that belonged to a neighbor by the name of Billlings, which was excellent for squirrels, rabbits, and partridges, and would always follow him when he went out, though Billings was “plaguy made about it;” however, he had only to go by Billlings  to have the dog accompany him. B. afterward carried her up country and gave her away, the news of which almost broke Minott’s heart. He said he could have cried when he heard of it, for he had dreamed of her several nights. She was a plaguy good dog for squirrels, etc, but her pups were none of them equal to herself. It was not time for squirrels now, because the leaves were not off enough. He used sometimes to take his old king’s-arm on these excursions. It was heavy, but it was sure. His present gun has a flint lock and has often been repaired, and he said he didn’t suppose it would fetch more than a dollar if put up at auction now. But he wouldn’t take twenty dollars for it. He didn’t want to part with it. He liked to look at it.

As leaves fall along the river and in the woods, the squirrels and musquash make haste to shelter and conceal themselves by constructing nests and cabins.

Why flee so soon to the theatres, lectures-rooms, and museums of the city? If you will stay here a while, I will promise you strange sights.  You shall walk on water. All these brooks and rivers and ponds shall be your highway. You shall see the whole earth covered a foot or more deep with purest white crystals in which you slump or over which you glide, and all the trees and stubble glittering in icy armor.