In many instances the snow had lodged on trees yesterday in just such forms as a white napkin or counterpane dropped on them would take—protuberant in the middle with many fold & dimples— An ordinary leafless bush supported so much snow on its twigs—a perfect maze like a whirligig—though not in one solid mass—that you could not see through it— We heard only a few chic-a-dees. Some times the snow on the bent P. Pines made me think of rams’ or elephants’ heads ready to butt you.

In particular places standing on their snowiest side the woods were incredibly fair—white as alabaster—indeed the young pines reminded you of the purest statuary.  & the stately full grown ones towering around affected you as if you stood in a Titanic sculptor’s studio. So purely & delicately white—transmitting the light—their dark trunks all concealed. And in many places where the snow lay on withered oak leaves between you & the light—various delicate fawn coloured & cinnamon tints blending with the white still enhanced the beauty. 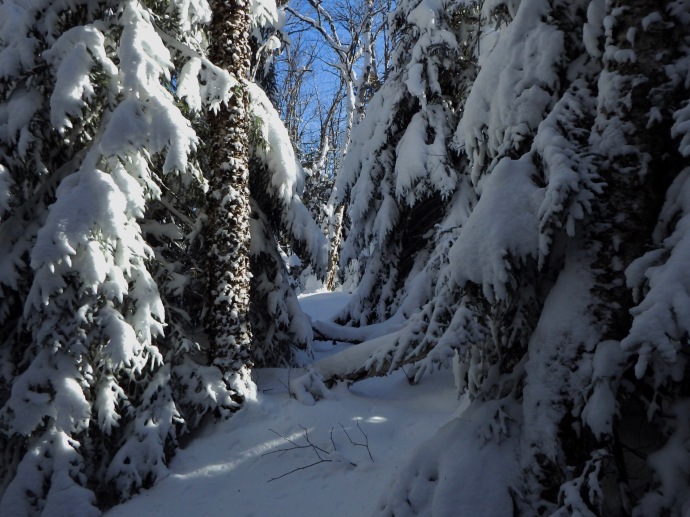 How new all things seem!  Here is a broad, shallow pool in the fields which yesterday was slush, now converted into a soft, white fleecy snow ice…It is like the beginning of the world. There is nothing hackneyed where a new snow can come and cover all the landscape…The world is not only new to the eye, but is still as at creation. Every blade and leaf is hushed, not a bird or insect is heard, only, perchance, a faint tinkling sleigh-bell in the distance…The snow still adheres conspicuously to the N.W. sides of the stems of the trees, quite up to their summits, with a remarkably sharp edge in that direction…It would be about as good as a compass to steer by in a cloudy day or by night…I doubt if I can convey an idea of the appearance of the woods yesterday. As you stood in their midst, and looked round on their boughs and twigs laden with snow, it seemed as if there could be none left to reach the ground. These countless zigzag white arms crossing each other at every possible angle completely closed up the view like a light drift within three or four rods on every side, the wintriest prospect imaginable. That snow which sifted down into the wood paths was much drier and lighter than elsewhere.